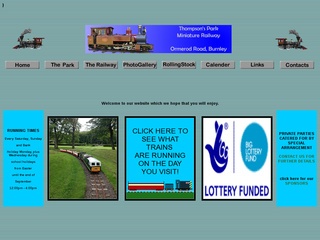 The Society was set up in 1990 by a few local people who each enjoyed operating Miniature Railways and grew to a dozen or so active members. For many years we have operated a portable seven and a quarter gauge track at many local Fetes and Fairs using a small electric loco to start with but this was later superseded by Brian Howorth's new Sprinter 150001, initially as a one coach unit, then two, then three and later four car set. Joe Milburns 0-8-0 Caribou Loco also visited. The length of the track grew to anything up to 400 yards. All this was raising money in the hope of eventually finding a site for a permanent railway. Over the years there have been a number of potential sites that would have been suitable for a permanent Miniature Railway.