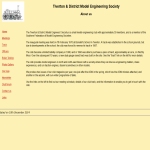 The Tiverton & District Model Engineers' Society is a small model engineering club with approximately 30 members, and is a member of the Southern Federation of Model Engineering Societies. The inaugural meeting was held on 7th February 1975 at Blundell's School in Tiverton. A track was established in the school grounds, but due to developments at the school, the club was forced to remove its track in 1987. The club became a limited liability company in 1996, and in 1998 was able to purchase a piece of land, approximately an acre, on Worthy Moor. Over the subsequent 10 years, a new dual gauge raised track was built on the site